American stand-up comedian, Dave Chappelle was attacked while performing a Netflix comedy show in Los Angeles on Tuesday night, May 3.

Video from the Netflix Is A Joke event shows a man charging onto the stage and tackling the comedian before being dragged off by security. Chappelle appeared to be uninjured and continued with his set, joking: ‘It was a trans man’. 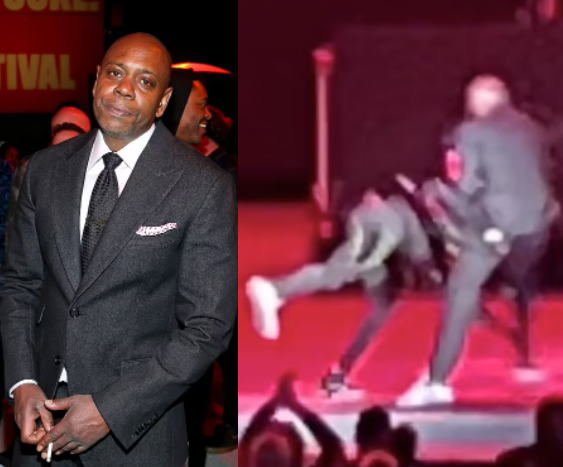 Jamie Foxx, who was watching the show at the Hollywood Bowl wearing a sheriff’s hat, rushed on stage to help detain the attacker.

Chris Rock, who later performed at the event last night came on stage and joked: ‘Was that Will Smith?’ after his own violent outburst on stage at the Oscars in March

After the attacker was detained, Chappelle thanked Foxx on stage during the curtain call.

He said: ‘Shout out to Jamie Foxx by the way. Whenever you’re in trouble, Jamie Foxx will show up in a sheriff’s hat.’

Foxx replied: ‘I thought that was part of the show, I didn’t know what the f***…’

Chappelle said: ‘I grabbed the back of that n**** head. His hair was spongy. Absorbent.’

Foxx added: ‘Listen, I just want to say, this man is an absolute genius. We’ve got to make sure we protect him at all times.

‘For every comedian who comes out here, this means everything. You’re a genius. You’re a legend, I enjoyed myself thoroughly, and we’re not going to let nothing happen to you.’

The man who attacked Dave Chappelle at his show on Tuesday, May 3, has been hospitalized with broken and dislocated hands while the comedian was uninjured.

Video from the Netflix Is A Joke event shows the attacker charging onto the stage and tackling the comedian before being dragged off by security. An unfazed Chappelle continued with his set, joking: ‘It was a trans man’.

Rihanna honored with a statue at Met Gala 2022 – Littyscenes